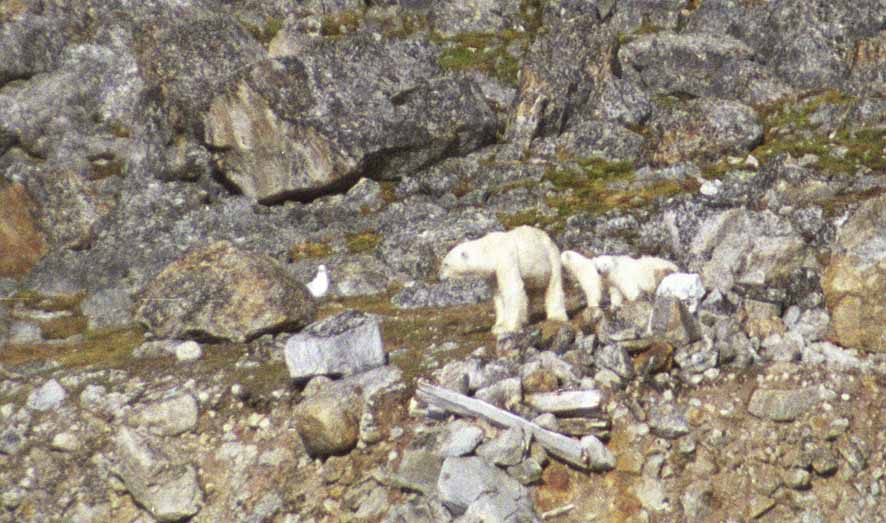 The Polar bears after a lecture of Martin Gray:

Mother bear dit not eat until march because if she had a kill, mainly ringed seal, she gave it to her cubs.
March last year she mated. That is the only time that Polar bears do have a territory. A male may follow the tracks of a breeding female for 100 km. Mating of Polar bears is not romantic at all, they just penetrate once and that is it.
After mating, the fertilized egg remains in a suspended state until August or September. During these four months, the pregnant female eats prodigious amounts of food, gaining at least 200 kg and often more than doubling her body weight.
Between November and February, cubs are born blind, covered with a light down fur, and weighing less than 0.9 kg. On average, each litter has two cubs.
The first summer is the most difficult for the little ones, males like to kill them so they can mate again with the mother.

After two years and four months the cubs have to find their own way.
Polar bears can get 25 years old.

♀150 – 300 Kg recognizable by the larger distance between nose and eyes.

When polar bears attack their prey they are aggressive, even when they plunder eggs from a nest, they run towards it as if they are afraid that it will walk away. Chicks are beaten as if they where large prey with large resistance. When the bears finally stop, they can just lick it of the ground.

Never dissapoint a Polar bear, it happened more than once that curious bear found a snowscooter, burned his nose and got so angry that he smashed the whole thing.